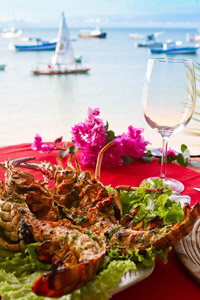 Búzios is also a paradise when it comes to fine dining, with a mixture of French, Italian, Japanese, Thai... In each, typical flavors and delicacies fit for the most demanding and varied palates. The reason for such diversity is the large number of foreigners who came to spend a few days in town, fell in love, and never left. From their birthplaces, they brought the spices and secrets that enhance the seafood dishes – fish are the flagship of local cuisine, after all, Búzios emerged as a fishing village and is surrounded by beaches on all sides.

At dinnertime, the traditional address of restaurants is "Rua das Pedras" and its continuation - Orla Bardot, a beautiful stretch that leads to Praia dos Ossos, the birthplace of the town of Búzios. A great tip for this area is the trendy Bar do Zé which, in spite of its name, is an authentic Búzios’ style restaurant. Dishes are served on colorful tablecloth covered tables, while candles ensure not only light but also coziness. The kitchen serves risottos, such as the shrimp, brie, asparagus, and truffle oil risotto; and fish – like the grouper with mixed mushrooms -, as well as fresh pasta and meats.

Straight from the East

Continuing with the eastern ambience, the Buda Beach Bar offers a varied menu accompanied by Buddha idols and waterfalls scattered throughout the garden.

Also on Orla Bardot, at the charming Mermaid House, you will find restaurant Salt. There, the typical Búzios architecture shares the attention with the ocean facing deck tables and with the Mediterranean menu created by chef Ricardo Ferreira. Among the suggestions, guinea fowl risotto with spices and pistachio. Fans of oriental cuisine should opt for the sesame crusted tuna with wasabi puree and crispy kale.

The Orla Bardot was also the place chosen by Peixe Vivo pizzeria and grill, which is located on a plot on the sea. There, the wood oven made pizzas and Mediterranean recipes face a strong competitor: the beautiful view of the Armação beach.

Cigalon: romance from appetizers to dessert

At Rua das Pedras, the sophisticated Cigalon, is located in the house where Brigitte Bardot chose to spend her days in Búzios in the 60’s. The dishes, which have a French touch, are created by Argentinian chef Sonia Persiani. Among the house’s mouthwatering suggestions are the crayfish crusted in two sesames, leafy greens and oranges, followed by the sea bass with mushrooms and spinach. To end the meal on a high note, go with the green apple crisp, almond cream, and cinnamon ice cream.

Pátio Havana makes an impression with its architecture and décor by Hélio Pelegrino and Sig Bergamin. There are five rooms: whisky bar, wine cellar, pool lounge, patio, and bistro. The live music - jazz, blues and MPB – rocks the space, which also has sea facing tables and a great menu, signed by chef Ismael Malafaia.

By the same owners, Estância Don Juan invests in products from Argentina and Uruguay, such as meats and wine. On Tuesday nights the tango takes over the house.

To enjoy fresh pasta and typical Italian cuisine like ossobuco and veal scaloppini with risotto, go to the cozy Parvati, decorated with pictures of folkloric Búzios characters. Japanese cuisine comes to the table rocked by electronic music at the trendy and small Captains Bar.

// DURING AND AFTER THE BEACH

During the day, the tip is to grab a bite at the kiosks and bars scattered along the beaches. Most serve anchovies and snapper on the grill, portions of freshly caught shrimp and calamari, as well as full meals such as fish stew (moqueca) and lobster. The left corner of Ferradura Beach is full of options, like the crispy shrimp patties from Samucas Bar. At Brava Beach, try the ceviche at Rocka Beach Lounge & Restaurant. In José Gonçalves Beach, Ranieri’s seafood shells are famous; while in bustling Geribá Beach, the acai and the sandwiches at the Fishbone Café are famous.
The city also offers excellent “by the pound” dining options. Downtown, the Buzin and the Bananaland, both in Rua Turíbio de Farias (which runs parallel to Rua das Pedras) offer sophisticated recipes served in edgy settings. There are also establishments that serve the so called artisanal Búzios cuisine, like Barbado, David, and O Barco. The Porto da Barra also offers varied options. Put aside at least one day to go to Chez Michou. The crepes, with many different fillings, have been a hit for over twenty years. Among the clients’ favorites are the dried beef with catupiry cheese and the classic Alessandro, with cheese, ham, tomatoes and oregano. For dessert, go with the banana, crunchy chocolate and vanilla ice cream crepe – unbeatable! And to enjoy the view from Praia do Canto Beach at dusk, go to the Santana Lounge, a cozy café inside the Rua da Praia gallery, in Rua das Pedras.

All about Porto da Barra

Stepping away from the Rua das Pedras-Orla Bardot circuit, an excellent alternative is the Porto da Barra, a space attached to the Manguinhos fish market.Sitting on a boardwalk between the beach and the mangrove, bars, restaurants, home furnishing shops, and studios are scattered throughout the pleasant setting – perfect for a sunset or night outing.

There you will find the pioneering Bar dos Pescadores and the contemporary Zuza, headed by chef Cristopher Cabicieri. The complex encompasses restaurants with varied cuisines like the relaxed Bar do Mangue, which specializes in grilled fare. Practically next door to the Porto da Barra is Espaço Domme, a complex with a beachy décor that comprises Japanese restaurant Kojiki and Mare, which specializes in seafood.

Also in Manguinhos you will find restaurant Gisele. After masterfully captaining the Bar dos Pescadores, she opened her own place. The highlights are the delicacies that ensured the chef’s fame – the shrimp patties, the fish stews (moquecas) and the steamed crawfish. On Saturdays, the star is the feijoada, which draws a huge crowd!

On to Geribá, the place to go is the Farinatta, with the delicacies of the legendary restaurant Quintal. Among them is the President’s Gnocchi, made with shrimp, sweet potato, and Irish potato; and the Macaquito, which combines large shrimp with plantain cream, crunchy farofa, and rice.